In the morning, we met in the breakfast room and had all the breakfast we had ordered with the most beautiful view from the large panorama window and in the beginning, the weather was still nice. After packing our suitcases, we wanted to finish loading the car, but the slope in front of the house was so steep that it was impossible for us to put all the heavy suitcases into the trunk and close the flap without some immediately slipping out again. It was kind of funny, but dangerous. So I first had to drive a few meters downhill into flat terrain, where we could finish loading and then finally drive off. At the crossroads, Karin finally found a mailbox she had been looking for for at least two days. Either we hadn't seen one at all or it was standing on an opposite side of the road or in some other inaccessible place during the drive. Now at last she could finally deliver in her postcards. Well, in the course of the day and afterwards, when we didn't need one anymore, we saw mailboxes all the time...

We drove quite a bit along the northern shore of Loch Leven towards Fort William and made our first photo stop of the day.

Our first destination on this day was a short visit to Inverlochy Castle, a castle ruin on a river shore which used to be completely surrounded by water. Today, it is a quiet little ruin with still quite thick walls. The road to the parking lot leads over a small wooden bridge and some of us were concerned as it didn't look very trustworthy, but it held our weight.

Unfortunately, it started to rain again, but we wanted to continue quickly anyway and try our luck again with the Glennfinnan viaduct and monument. Therefore, I had done research the evening before to find out how to get to the view point from above, I had found the post code on google. We knew when the morning train would leave Fort William and how long it would take about to get to the viaduct, so we definitely wanted to get there in time before the train would pass the viaduct. We  passed the train station by car just when the train left, we heard it whistle and saw it a few times to our left, the road went right next to the tracks at the beginning, after that we were faster, so actually still good in time.

The main parking lot at the Glenfinnan Monument was full and closed, but we wanted to pass it and take the road up to the right. Unfortunately, there was a construction traffic light, which cost us much time, then we came to another small and overcrowded parking lot and the road uphill, which I actually wanted to drive up to reach the view point, was closed for cars and only accessible for pedestrians. So another time, I wasn't successful with the view from above, we already heard the whistle of the train. Quite frustrated, I drove carefully out of the from the narrow parking and to the main parking lot, so that the others could take at least a picture of the viaduct from the side, and of course of the monument on the other side of the street. There will be a next time, I promised myself. All good things come in threes!

This would've been the view from above: 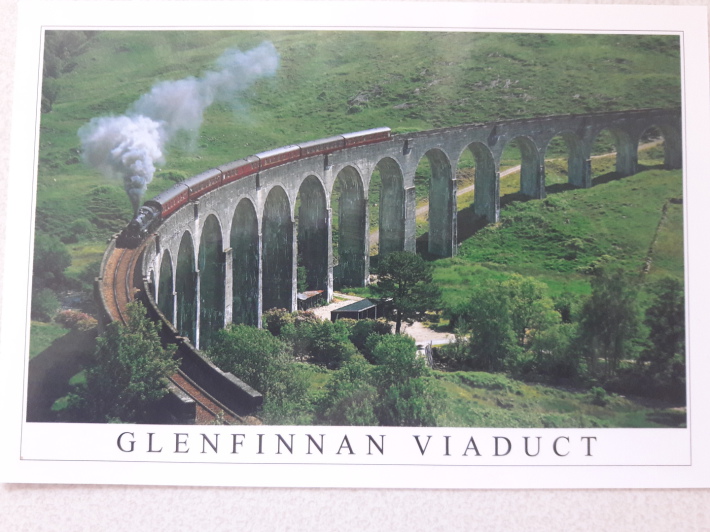 Then we went on to Invergarry Castle, a castle ruin directly at the main road on the way to Drumnadrochit, of which remained only little more than one wall, 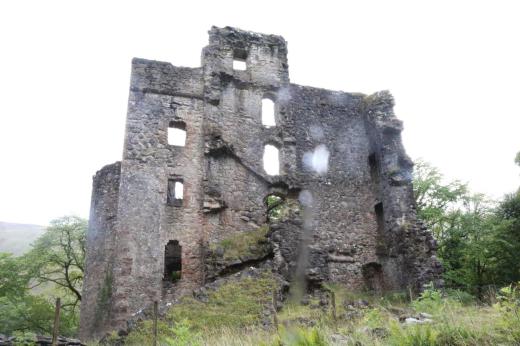 where our first main target of the day was located, Urquhart Castle. On the way we made another stop at the famous Loch Ness in beautiful sunshine. Arriving at the castle grounds, we found a disabled parking lotjust opposite the entrance of the castle, which was also included in our Explorer Pass. In the visitor centre, we took the elevator one floor down, where the main level is, there are toilets, shop, a cafeteria and a small cinema, where we first watched a 10-minute film about the long and really interesting history of the castle, in English, but it was with Italian and German subtitles on request, there is a guide who aks for each reproduction the languages of the respective audience. Afterwards, we went outside to the terrace, from where there are steps down to the castle ruin. It was already incredibly windy and the wind got stronger all the time, even if it was still mostly sunny and not cold at all. Nevertheless, we managed to take some really nice pictures. Urquhart Castle lies on a spit directly at Loch Ness and was abandoned about 300 years ago by Clan Donald and blown up when they left with huge loads of gunpowder. This which happened without being necessary and really is a pity, but the preserved parts are very well restored and very well explained with display boards everywhere.

We left in time, we wanted to arrive at Eilean Donan Castle on the west coast in time to visit it before it would close in the evening. I knew the road from the previous years, it leads up into the mountains and over a very well developed route, but has many curves in ever more canyons, past dam walls, lakes and wide rivers, small streams, again and again smaller waterfalls on the slopes or beautiful old, small stone bridges to old branches. Just one beautiful and amazing view after another. Finally, we arrived in time before 4 o'clock at the Castle, where we bought tickets (the castle is private and not included in the Explorer Pass) and were allowed to look around on ourselves. Eilean Donan Castle means "Donan's Island" and is connected to the mainland by a long stone bridge at the edge of Loch Duich, which there merges into the sea and the air smells salty or musty like seaweed, when the tide is low again, like this afternoon. The castle was a ruin until 100 years ago, when it was bought by a wealthy nobleman and rebuilt according to old plans. It is still partly inhabited by the family today, is equipped with authentic furniture and many historical collectibles. It is also possible to rent the big hall for weddings etc. One of the most beautiful rooms after the big hall is the kitchen in the basement, completely furnished as at the beginning of the last century, with lifelike figures and food of really all kinds, looking real but preserved, and all kitchen equipment, this place is really worth seeing and equipped with love to the detail.

But there was also bad news that I got by email from the boat tour company at Skye; due to the strong wind and the bad weather forecast for the next day, our boat trip on the Isle of Skye was cancelled! They regretted this very much and offered us a later date on another day. However, this would not be possible for us because we would travel on and Skye would simply be too far away afterwards. It took me quite a while to digest this, I was so disappointed and pissed, because I had spent lots of time preparing and selecting the provider and was really looking forward to the planned boat trip to dolphins, seals, wild birds etc., also for my co-travellers.

Well, now we had to think about something else for the morning on Skye, a friendly steward on Eilean Donan Castle, with whom Conny and I talked for a while, recommended us among other things Armadale Castle, which we shortlisted.

When we left the castle, café and gift shop were already closed and we headed directly to our next accommodation, Ashgrove Bed and Breakfast in Balmacara. The way to this village was kind of strange; we found, between Dornie and Kyle of Lochalsh, a small village named Balmacara directly at the coast and the main road, the satnav led us to the end of the village, to the right up into the mountains towards Plockton, immediately after that, there was a narrow road that led us into the forest, where we after approx. 1 km came across a small village and found the B&B, as I had seen it on the picture in the internet. We were greeted by our landlady Ann and took our rooms. Conny and Christina took the double room with small bath, the other three took the triple room with adjoining large bath. We filled in our breakfast orders, similar to the day before, got ready for dinner and drove by car towards Kyle and bridge to Skye. 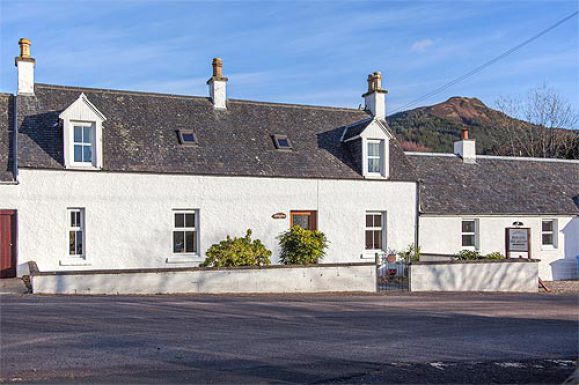 We drove towards Skye and stopped before Kyle at a parking lot on the left side of the road, which overlooked the whole bay and gave a beautiful view to the bridge that connects Skye with the mainland only since about 20 years. Kyle doesn't really have much special to offer, a coastal road, a few old inns at the side, otherwise residential areas and the harbour, so we drove over the high curved bridge further to the island. The small fishing village Kyleakin is located opposite to Kyle and has some restaurants directly at the water. We wanted to try our luck first in the big hotel with restaurant which is located in the first row at the coast and found a parking place in an alley behind it. Unfortunately, although the sign in front of the entrance friendly invited us in also as non-hotel guests, we were handled relatively unfriendlyby a woman, the restaurant was now open for the hotel guests, we should come back in an hour or such - but we decided better to try our luck somewhere else. This was really the first and only time that we were greeted somehow unfriendly and it was also a non Scottish woman, something Eastern European according to her accent. Well, that's all I will say or write about it. The next restaurant was more like a snack bar and didn't make a good impression in terms of quality and comfort, so we ended up at the Kylearn Castle Moin Restaurant, which was also fully seated when we came in, but they immediately offered us to the attached bar and promised us the next free table. We had hardly agreed to this, when a group got up, there was a big table available for us and a nice and obviously gay waiter cleaned it for us. We almost all ordered the soup of the day - tomato with pumpkin - which was very tasty, only Karin skipped it, two courses were as usual too much for her, she rather ordered a main course, this time hake with fries, otherwise also called fish and chips, with the apparently obligatory peas. We all had a really good meal and can only recommend this place!