Thursday, September 6th - from Frankfurt Airport to Glasgow Very kindly and comfortably, my daughter Carmen and her friend Dennis drove Conny and me to Frankfurt Airport and right on the way, Cennis made my laptop work again which I would need urgently for our trip - thank you for both driving and helping!

While we started in German summer heat which left us soaked with sweat and exhausted already in the morning, after packing, even before our tour started, we had our first rain shower while driving on the autobahn to get accustomed to Scottish weather. Traffic was rather dense and we arrived shortly after noon at Frankfurt Airport. Within a few minutes, all 5 of us gathered and had a heartily welcome, excited for what was up to come. We went through the familiar procedure - fast bag drop needed some explanation of a helpful Lufthansa staff member, the mandatory visit of the toilets and through the security check to boarding. Right after security check, we were quite astonished, there was a long, seemingly endless queue/line in front of us. Another staff member suggested to just walk alongside to the front  what we did, a strange gut feeling indeed, overtaking all the other people waiting...

Further ahead, we saw these queues ending in front of several boothes for passport check - none of us had ever experienced such a crowded check area! So what now - going backwards and joining the line would mean the plane might possibly lift off without us. And once more we were lucky; a staff member in uniform whom we asked sent me to an almost hidden booth around a corner with only a few people waiting, so we were checked in in no time! What a giant luck! Our flight with Lufthansa was comfortable and uneventful, but with much anticipation from our side for the upcoming days. 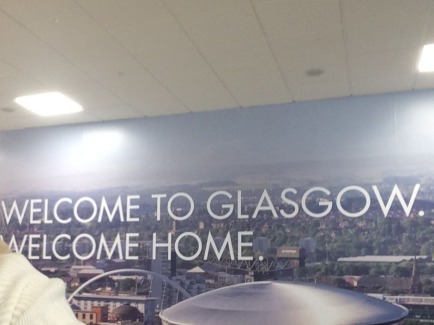 After an early landing at Glasgow airport and passport control, we headed to the Car Rental Center, just to the left at the exit, waiting only about 10 minutes until Karin had her first cigarette after a long waiting. What time we had spared with the early landing, was lost twice while waiting at Europcar - how long has is been that you have to draw numbers at a car rental?? - and we agreed on Conny as our second driver. When I suggested to remove the spare seats (a VW Sharan offers 7 seats, while we were only  by 5 - no convert advertising, just a fact), the friendly young man a the desk offered a slightly bigger car for a small upgrade. Well, the upgrade wasn't really small and when we went outside to check the Vito offered, I saw immediately that this car was way too big for me and for small Scottish Highland roads! The clerk also asked whether I wanted a satnav (we hadn't ordered one for reason of cost; we had been planning on using Sabine's, but she couldn't get an update for Great Britain) and I replied offhandedly "only if it's for free"; he just nodded and I had a satnav for free because this was already an integral part of the car! To be honest, I had been hoping for that - after all, bigger cars usually have one and the rental company wouldn't remove it from the car just because a customer didn't order one...

Eventually, we got the keys for our white Sharan, I had a little fight with the hand brake button that needed explanation, but in the end we could load everything into the car, the spare seats were clapped down, the trunk was quite full with 5 suitcases, 5 trolleys and jackets, we took a few pics and off we went towards Glasgow city center where I had booked our first apartment. I easily got used to driving on the left side of the road (the wrong side!) again, it wasn't my first time after all.

Although we had landed so early, everything had taken quite a long time, a traffic jam on the way to the city led to the fact that we were already much later than agreed with the rental agency and they had called me several times on my mobile phone, because they wanted to know when we would finally come to hand over the keys. 17 o'clock was actually agreed, but the rental car had simply cost too much time. Finally we were in the right street - Ingram Street - and looked for the right house number. Unfortunately, the house numbers went on in big jumps and shortly after we passed the number 120 we were looking for. I turned left to drive once around the square and stopped briefly at the roadside to call the agency again when it knocked on the left side window to the sidewalk: A policeman in full combat gear looked at me angrily and I really got the shock of my life: "You won't actually drive a car and talk on the phone at the same time?!" I was almost paralyzed, saw myself already confronted with a hefty traffic ticket or worse and tried to explain the situation that we got lost and had to call the agency to find out how and where to go now. Surprisingly, the policeman was very understanding and told me to make a u-turn and turn right again at traffic lights, the address I was looking for was just around the corner. Very relieved, we were allowed to drive on without problems and immediately after the turn we saw a man standing in front of the front door of number 120, who got into our car and guided us into the parallel street to the entrance to the underground garage, where we had booked a parking space, which was a really good and also cheap solution in the city. Here it immediately became apparent that it would not have been a good idea to choose the larger Vito - already with the Sharan, there was only a few centimetres of space on the right and left of the exterior mirrors when driving in. Very carefully I took the entrance and we could finally park our car in the underground garage. The apartment turned out to be very nicely and luxuriously furnished, per double room we had one bathroom and one sofa bed in the living area for the fifth person, which merged seamlessly into the dining area and the spacious kitchen. Karin chose the sofa bed, Sabine shared room and bed with Christina and Conny with me. After we had made ourselves at home, it was already relatively late, we set off to explore the area on foot. I had found out before that John Street and George Square were in the immediate neighborhood in the west and I wanted to show the girls at least these two sights on the first evening. John Street was just around the first corner, this is the street between the classicistic administration buildings of Glasgow, where the wedding scenes with Claire and Frank were filmed. We weren't the only ones who took photos there, whether because of the beautiful (though darkly discolored sandstone buildings) and the gate or as Outlander fans like us, remained open.

Then we went west one more block to George Square, which extends over two large blocks, consisting of lawns, flower beds and many memorials and sculptures, as well as many beautiful sandstone buildings all around.

Here we finally got our first group photo taken: 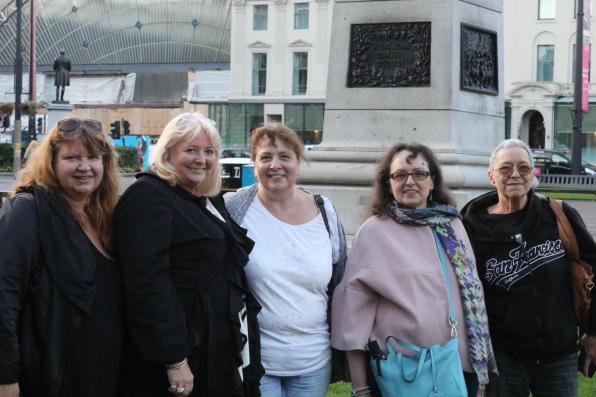 Finally, we looked for a restaurant for dinner and ended up in Piazza Italia, a good and quaint restaurant on John Street with Italian food.

We got an excellent dinner and had lots of fun together before we finally fell into bed, reasonably done. 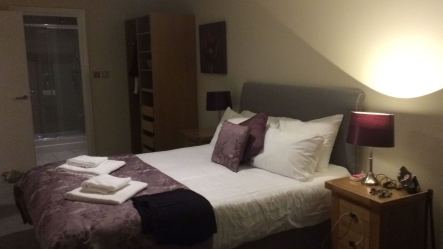